The operation is not allowed in the current connection state of the host - Power on VM vCenter 5.5

The error which I was faced with was a relatively generic message based on the host connection status.

The ESXi server itself was connected to vCenter and had a number of VMs already powered on and working correctly.

However I noticed that the CPU and Memory utilisation statistics for the ESXi server were showing as zero "0" used, odd because there were 3 VMs already powered on using CPU and memory resources.

With my running VMs still powered on, I disconnected this host from vCenter (waited about 1 min), then connected the host back to vCenter. 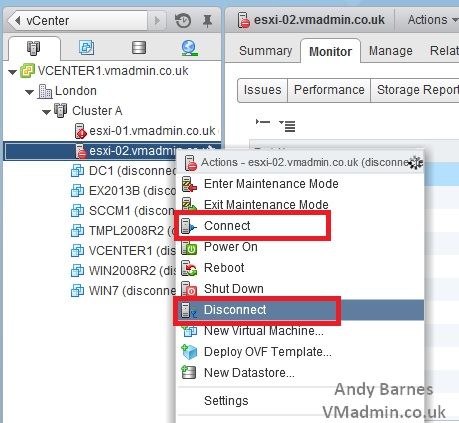 The ESXi server CPU and memory statistics were now showing correctly for my powered on VMs.

Attempting to power on a VM is now successful.

This is the first time I have seen this host connection issue with vCenter 5.5, if it happens any more I will update my comment here and report a bug to VMware.